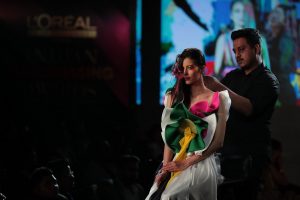 After a successful run in the South, the Indian Hairdressing Awards by L’Oreal Professionnel moved to New Delhi for its North Region finals. Hairdressers from North India competed for an entry into the coveted grand finale. Various categories for the competition comprised Colour Trophy, Cut & Style, Young Colourist and Men’s Image.

As with the South Region Finals in Chennai, the North Region edition of IHA also had an awards ceremony after the competition. The L’Oréal Professionnel Dream Team celebrated hair artistry with an awe-inspiring performance with their show ‘ART Infinite.’

Speaking at the event, Binaifer Pardiwalla – General Manager, L’Oréal Professionnel India, spoke about L’Oreal Professionnel’s efforts for the betterment of the industry and the digital innovations that they will be bringing to the market.

The show ended with the announcement of the winners of the IHA 2018-19 North Region Finals.

And the winner is…

Watch this space for more updates about the IHA East and West Region Finals.

‘Cutting Edge Dialogues’ by Schwarzkopf Professional with the...

Tell your clients about this holistic hair care...