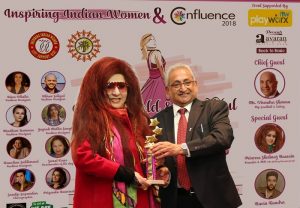 The Herbal Beauty Queen of India, Shahnaz Husain, has been honoured with three prestigious awards in London in November 2018.

Shahnaz Husain, the pioneer of the herbal beauty brigade and founder of Shahnaz Husain Cosmetics, has received three prestigious awards in London in November 2018. She attended the Ayurveda Day Celebrations at the British Parliament in London, where she was honoured with the Excellence Award, in recognition of her contribution to Ayurveda. Speaking about Ayurveda, she said that for the western world, staggering under the effect of chemicals, Ayurveda is the only natural alternative. She continued, “Ayurvedic inheritance combined with artificial intelligence is India’s gift to the world.”

Shahnaz also received an Award for Excellence for her innovative Chemoline Range for cancer patients at an event for Cancer Survivors. She was honoured with this Award for the pioneering work that she has done in promoting Ayurveda worldwide. The event was held at Holiday Inn, Regents Park, in London. She received the award from Shashikant Patel, Treasurer and senior most member of BJP Overseas.

She was invited by the British Prime Minister, Theresa May to a Diwali Celebration at 10, Downing Street, London. Philip May, husband of the Prime Minister, was also present at the event.

Shahnaz was also honoured with the Confluence Excellence Award for ‘Pioneering Ayurveda Worldwide’ in the British Parliament. The award was presented to her by Baroness Sandy Verma, MP, House of Lords and Mahendra Singh Jadeja, Chairperson Confluence, U.K. Chapter. Also present at the event was Smiti Shrivastav, Founder Director of Confluence Foundation. The event was followed by lunch at the Churchill Room in the British Parliament.

According to Shahnaz, “Receiving three prestigious awards in London is global recognition of my crusader’s zeal and relentless efforts to take Ayurveda to every corner of the globe.”

Awarding the art of hairdressing