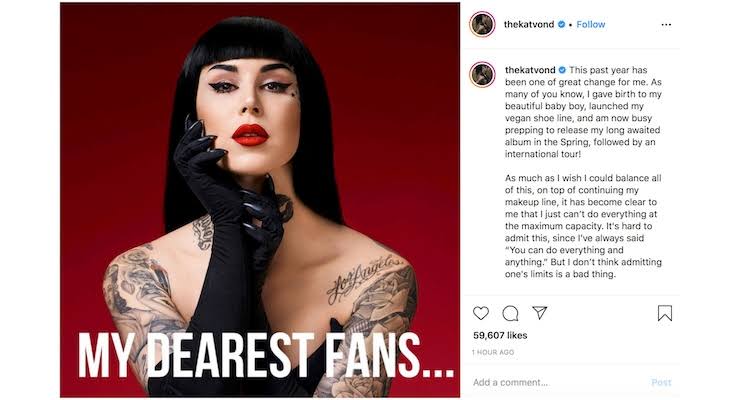 Tattoo artist and performer Kat Von D has sold her vegan beauty brand to Kendo, a company owned by French luxury goods company LVMH, and will cut ties with the brand

Katherine Von Drachenberg is best known for appearing on the TLC reality show “LA Ink,”, controversies and her makeup brand, Kat Von D. Kendo, which has partnered with Von D on the cosmetics line since its launch in 2008, will become the owner of the brand and rename it KVD Vegan Beauty.

Inception of Kat Von D Beauty
Katherine Von Drachenberg or popularly known as Kat Von D formulated a vegan makeup line in 2008 and launched it in Sephora. The makeup line was known for its bold colour choices and rebellious packaging. One of the first few products that was sold was the liquid lipstick Lolita, which is till date one of Sephora’s best selling liquid lipsticks. All the designs on her packaging were illustrated by Von D herself, as to her it was a form of self expression.

Kat Von D’s instagram post
Kat Von D took it to herself to inform her audience about the current happenings of her life. She posted a heartfelt message on Instagram in which she said, “This past year has been one of great changes for me. As many of you know, I gave birth to my beautiful baby boy, launched my vegan shoe line, and am now busy prepping to release my long awaited album in the Spring, followed by an international tour! As much as I wish I could balance all of this, on top of continuing my makeup line, it has become clear to me that I just can’t do everything at the maximum capacity. With that said, I’ve decided to sell my shares of the brand, turning it over to Kendo, my partners for the past 11 years. This was not an easy decision, but after careful consideration, I decided I wanted the makeup line to continue to thrive and grow, and I believe Kendo is primed to do just that.”

She also assured her audience that this transition would be seamless for them and that she was confident that the team at kendo would continue the legacy of KvD beauty.

The future of KVD Vegan Beauty
The line currently has more than 250 products and is sold primarily at Sephora. Kendo said it plans to continue the current product lineup and to develop new vegan and cruelty-free products. “We are fully positioned to continue the brand’s growth and development in both product and marketing,” Kendo CEO David Suliteanu said. “We have developed a very strong product pipeline for 2020 and beyond.” Kendo also has served as the LVMH incubator for brands including Rihanna’s Fenty Beauty, Marc Jacobs Beauty and Lip Lab stores.

The Good Girl has found a new Bad Boy in town

Kartik Aaryan to be the new face for Bombay Shaving Company

Bridal Look of the week by Avleen Bansal

Bridal Look of the week by Ojas Rajani

L’Oréal Paris to stand up against street harassment

Mask-up and let the eyes speak this festive...

Bridal Look of the week by Avleen...

Bridal Look of the week by Ojas...